This Reading Group is sponsored in part by the Humanities Center at Texas Tech. The 2019–2020 theme is "Justice".

Join our series of book discussions on Calypso 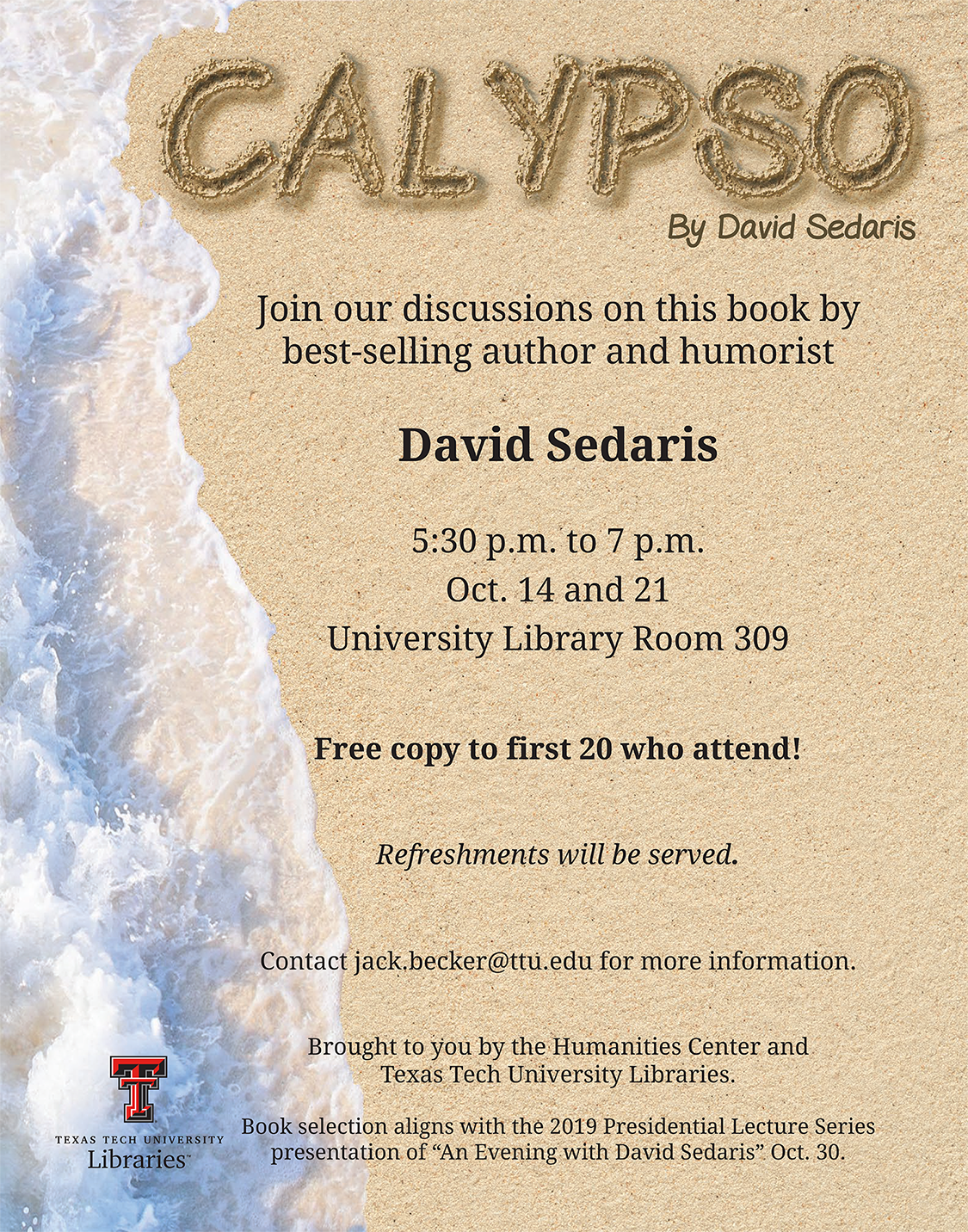 An Associate Professor in the Department of English. She is the author of Girl Power and Other Short-Short Stories (ELJ Editions, 2015) and Make Way for Her and Other Stories (University Press of Kentucky, 2018). Her work has earned prizes from Narrative Magazine, River Styx, Silk Road, and elsewhere. Her prose has recently appeared in journals such as Gargoyle, Animal: A Beast of a Literary Magazine, Indiana Review, Burnside Review, Gulf Coast, Third Coast, Blackbird, Word Riot, PANK, and elsewhere. She serves as faculty advisor for TTU's undergraduate literary journal, Harbinger, and Fiction Editor for Iron Horse Literary Review. She organized Write Our Democracy, Reading at the Louise Hopkins Underwood Center for the Arts, a cross-disciplinary event that featured students, faculty, and alumni from Texas Tech as well as community members.

An Associate Professor of Humanities and Literature in the Honors College. Before coming to Texas Tech he was Director of the Southern Historical Collection at the University of North Carolina at Chapel Hill.

Bryan is an interdisciplinary teacher and thinker whose courses span American studies, literature, and history. He is author or an editor of six academic books on American literary and cultural history, ten book chapters, and more than thirty published articles and reviews. As principal investigator of grants from the Andrew W. Mellon Foundation and National Endowment for the Humanities, among others, he has led a variety of public humanities projects concerning the history and culture of the U.S. South. Bryan's teaching has been recognized by the State Council of Higher Education's Outstanding Faculty Award, deemed “the Commonwealth's highest honor for faculty.”

An Assistant Professor in the Department of English. Dr. Faris's research interests include digital rhetoric and literacy practices, social media, feminist and queer rhetorics, and composition and technical communication pedagogy. As Assistant Chair, he co-administers the First-Year Writing program at Texas Tech. Dr. Faris is also the Managing Editor for Kairos: A Journal of Rhetoric, Technology, and Pedagogy. 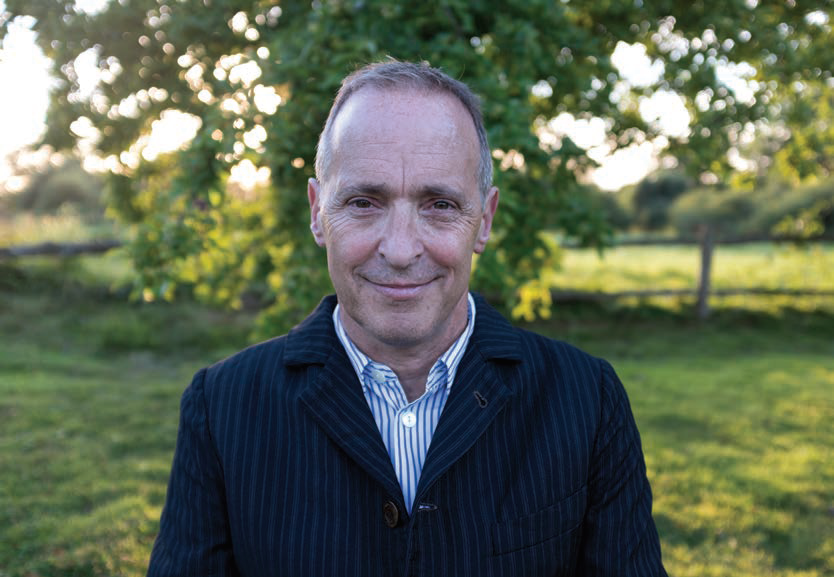 About the author provided by the Steven Barclay Agency

With sardonic wit and incisive social critiques, David Sedaris has become one of America’s preeminent humor writers. He is the master of satire and one of today’s most observant writers addressing the human condition. His latest book is a New York Times best-selling collection of his essays entitled Calypso.

Beloved for his personal essays and short stories, David Sedaris is the author of Barrel Fever, Holidays on Ice, Naked, Me Talk Pretty One Day, Dress Your Family in Corduroy and Denim, When You Are Engulfed in Flames, Let’s Explore Diabetes with Owls, and Theft By Finding: Diaries (1977-2002). He is the author of Squirrel Seeks Chipmunk: A Modest Bestiary, a collection of fables with illustrations by Ian Falconer. Each of these books was an immediate bestseller. He was also the editor of Children Playing Before a Statue of Hercules: An Anthology of Outstanding Stories. His pieces regularly appear in The New Yorker and have twice been included in “The Best American Essays.” There are over ten million copies of his books in print and they have been translated into 25 languages. In 2018 he was awarded the Terry Southern Prize for Humor, as well as the Medal for Spoken Language from the American Academy of Arts and Letters.

He and his sister, Amy Sedaris, have collaborated under the name “The Talent Family” and have written half-a-dozen plays which have been produced at La Mama, Lincoln Center, and The Drama Department in New York City. These plays include Stump the Host, Stitches, One Woman Shoe, which received an Obie Award, Incident at Cobbler’s Knob, and The Book of Liz, which was published in book form by Dramatists Play Service.

Sedaris’s original audio pieces can often be heard on the public radio show This American Life. He has been nominated for three Grammy Awards for Best Spoken Word and Best Comedy Album. His latest audio recording of new stories (recorded live) is “David Sedaris: Live for Your Listening Pleasure” (November 2009). A feature film adaptation of his story C.O.G. was released after a premiere at the Sundance Film Festival (2013). Since 2011, he can be heard annually on a series of live recordings on BBC Radio 4 entitled “Meet David Sedaris.”

As a companion piece to his New York Times best-selling book Theft By Finding: Diaries (1977-2002), Jeffrey Jenkins published and edited an art book of Sedaris’s diary covers, entitled David Sedaris Diaries: A Visual Compendium. A second volume of his diaries is expected for summer 2020.

Sedaris, David. When You Are Engulfed in Flames (2008). BIO SEDA

New York Times: David Sedaris’s Back Pages, Before ‘SantaLand’ Made Him a Star (2018)

Guardian: Theft By Finding by David Sedaris review – diaries to make you gasp (2018)

Studybreaks : Your David Sedaris Starter Kit, Complete with 4 of His Best Comedic Essays (2017)

1. Thinking about how you talk about your own family, do you call those stories? Memories? Something else?

2. What are some of your favorite stories from Calypso? Does Sedaris remind you of your own family and friends or not at all?

3. This book is centered around death and mortality yet is unquestionably humorous. Why do you think Sedaris wrote Calypso this way?

4. The Sea Section beach house figures prominently in Calypso—a sort of home that isn’t home. Do you or your family/friends have a place like this?

5. How much do you believe Calypso is True or true? Does it even matter?