He is an Assistant Visiting Professor in the Philosophy Department. He earned his Ph.D. from the University of Maryland at College Park where he wrote “The Metaphysics and Ethics of Copyright” as his dissertation. His academic interesst include aesthetics, metaphysics, and ethics. He is a prolific writer, lecturer, and researcher and his work had been published in philosophical and law journals. He is currently teaching the course “Biomedical Ethics” where he uses “The Immortal Life of Henrietta Lacks” for the course. Biomedical Ethics or Bioethics covers a diverse range of topics, including doctor-patient relationships and genetic research, both of which are major themes of “The Immortal Life of Henrietta Lacks.”

A Professor and Director of Clinical Mental Health Counseling in Counselor Education at Texas Tech University; she’s a critical global multicultural-social justice womanist activist, scholar, storyteller, and servant whose work has spanned four decades.  As a helper, healer, and advocate for those marginalized and minoritized, she critically examines the intersectionality of multiple social identities and listens to the experiences, voices, and counternarratives of marginalized women, communities, and people in oppressive social structures, locations, and statuses. She’s the recipient of numerous awards including a national human rights award, social justice anti-oppression award, and a research award.

A member of the “first class” of young journalists after the fall of Communism in her native Bulgaria, she is an associate professor in the Department of Journalism & Electronic Media at Texas Tech. She currently serves as the head of the Magazine Media division of the Association of Education  in Journalism and Mass Communication (AEJMC) and the book review editor for the Journal of Magazine & New Media Research.

An Internal Medicine physician currently practicing in Lubbock, Texas.  She is a TTU/TTUHSC alumni who majored in biochemistry at TTU and worked in cell biology/biochemistry research.  She received her Doctor of Medicine degree at the University of Texas Medical School in San Antonio in 2003.  After medical school, she accepted a clinical research fellowship from the National Institutes of Health (NIH)/National Cancer Institute (NCI) to help investigate the minority health disparities seen in prostate and breast cancer where she helped develop several outreach and education programs to help bridge the gap.  Her research resulted in several publications and presentations.   She relocated back to Lubbock, Texas where she continued her clinical research with the Hispanic population, developing several outreach programs for obesity education and prevention.  In 2008, she began her Internal Medicine residency, where she continued to reach out and educate minority populations in order to decrease the rising health disparities.  She completed her residency in 2011 and continues to practice in Lubbock, Texas.

Join our screening of the newly-released HBO film 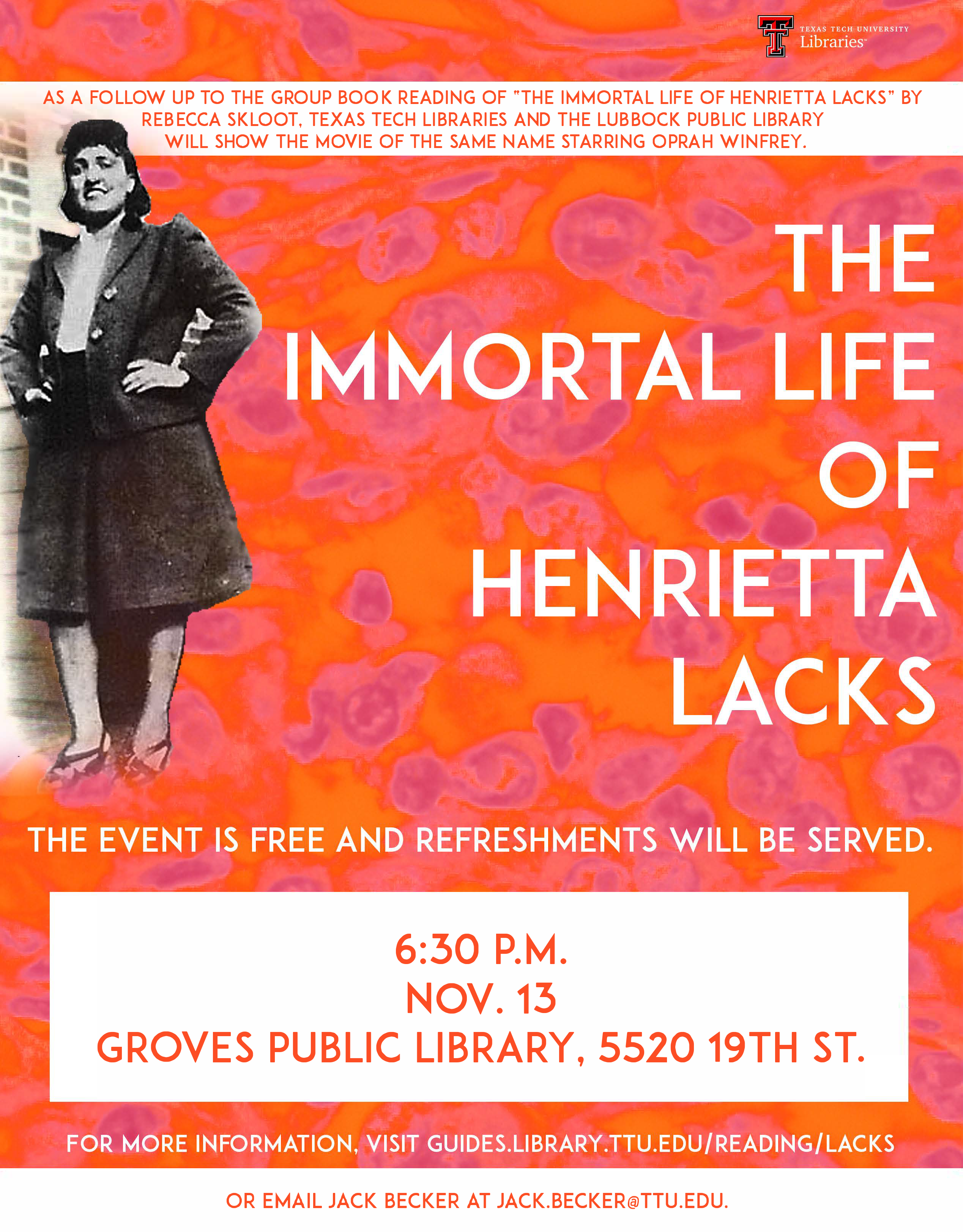 This Reading Group is sponsored in part by the Humanities Center at Texas Tech, Dorothy Chansky, Director.

Who was Henrietta Lacks?

Henrietta Lacks (August 1, 1920 – October 4, 1951) was an African-American woman born in Roanoke, Virginia. After giving birth to two of their children, she married her cousin David "Day" Lacks. In 1941, the young family moved to Turner Station in Maryland so Day could work in Bethlehem Steel at Sparrows Point. After Henrietta had given birth to their fifth child she was diagnosed with cancer. The tissue samples from her tumors, taken during treatment, were subsequently the HeLa cell line.

Even though some information about the origins of HeLa's cell lines was known to researchers after 1970, the Lacks family was not made aware of the lines' existence until 1975. The usage of the cells for medical and commercial purposes continues to raise concerns about privacy and patients' rights.

Video of Interview with Rebecca Skloot and Lacks Family

On page xiii, Rebecca Skloot states, “This is a work of nonfiction. No names have been changed, no characters invented, no events fabricated.” Consider the process Skloot went through to verify dialogue, re-create scenes, and establish facts. What does Skloot say on pages xiii–xiv and in the notes section (page 346) about how she did this?

One of Henrietta’s relatives said to Skloot, “If you pretty up how people spoke and change the things they said, that’s dishonest” (page xiii). Throughout, Skloot is true to the dialect in which people spoke to her. What impact did the decision to maintain speech authenticity have on the story?