Kimberly Vardeman
Kimberly is a Reference Librarian at the Texas Tech University Library, and she is the liaison to the Women’s Studies and Museum Science programs. She is one of the instructors of the Essentials of Scholarly Research course. Outside of the library, she enjoys playing the piano and baking.

Oct. 19, 2015
Professor Angela Diaz
Angela Diaz is the postdoctoral teaching fellow in Texas history. She received her Ph.D from the University of Florida with a specialization in antebellum United States southern history and a minor teaching field in Latina/o studies.

Diaz’s main areas of research include the American South, the Civil War era, borderlands studies, slavery, race, American imperialism and territorial expansion. Her current book project is based on her dissertation and addresses the process of U.S. territorial expansion into the Gulf of Mexico and the U.S. South’s interest in obtaining Latin American territory in the decades before the Civil War. In addition to her book, she also has a forthcoming article in the Florida Historical Quarterly, and has published several book reviews and essays. She has also presented at regional, national, and international conferences.

Professor Melissa Merz
Melissa Merz is currently in her 15th year of teaching here at Texas Tech University. As a costume designer she has designed in several states including California, Arizona, Texas, Oklahoma, Ohio, Michigan, West Virginia, and Vermont. The Department of Theatre and Dance produced To Kill a Mockingbird in 2007.

The time period of To Kill a Mockingbird is the 1930s during the Great Depression, the severest economic downturn in our nation’s history. It had a world-wide impact. It is generally believed The Depression began in 1929 and did not end until the beginning of World War II. At its depth, between 1929 and 1933, the gross national product decreased by one-third, which put between 13-15 million people out of work—about 20% of the work force.

In rural areas like Alabama, the depression was more severe than in urban areas. Rural areas like the fictionalized Maycomb, Alabama with its agriculturally-based economy, suffered from low agricultural prices (especially cotton), high unemployment, and little opportunity. As Scout observed in the beginning of the book everyone was poor, but some were poorer than others.

But the citizens of Maycomb, Alabama survived the Great Depression, like most rural people, because they could rely on family and friends, if need be, and they lived close to sources of food and could get by more cheaply than “city folk.”

Mondays during October 2015: To Kill a Mockingbird 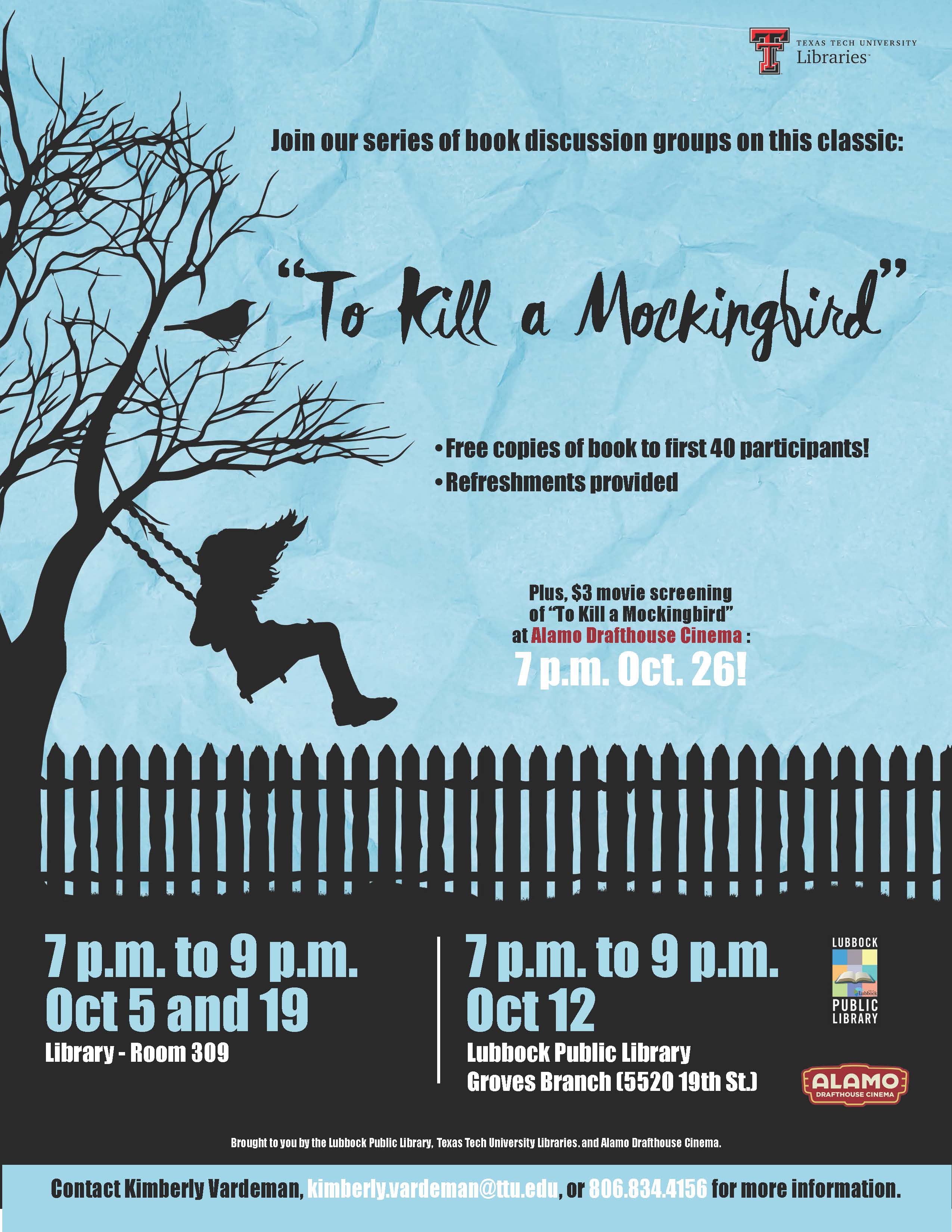 To Kill a Mockingbird Bibliography for Additional Reading

Books about Harper Lee or To Kill a Mockingbird (listed alphabetically by author, call numbers included where available):

Popular Fiction of the 1930s

To Kill a Mockingbird excerpt:

The group read excerpts from pages 1-2 and then from pages 4-5 and disucssed the paragraphs.

1. How old were you the first time you read To Kill a Mockingbird? What was your reaction to the book then? Did you love it, hate it, or maybe it was school work?

2. On being Southerners – what does that mean to Scout? To the people of Maycomb? What is in a name or surname?

3. What is the "disturbance" between the North and the South? Would we ever refer to the Civil War in this manner? Human chattels?

4. Examine the description of Atticus Finch’s office. What does it reveal about his character?

5. The setting is clearly being defined—what do we learn from these few paragraphs?

7. "A day was twenty-four hours long but seemed longer." Is this one of the first clues about the narrator?

1. The book is narrated by Scout looking back to her childhood self between the ages of six and nine.  How does a narrator influence how a story is told? If Jem were telling the story, how might it compare to Scout’s version? What if it were told from an adult’s point of view – from that of Atticus or their neighbor Miss Maudie?

2. Last, week we discussed that this would be a re-read for some people. How does this reading compare with your previous experience? What did you discover with this rereading? Do the characters and the plot stand the test of time? What stands out for you in the novel now?

3. How do Scout and Jem view their father, Atticus? How does the town regard him? What do they learn about their father over the course of the novel? What lessons does he teach his children both directly and indirectly about life, community, duty, decency, and courage?

4.  Jen tells Scout that there are four kinds of folks in Maycomb County, “our kind of folks don’t like the Cunninghams, the Cunninghams don’t like the Ewells, and the Ewells hate and despise the colored folks.” Is this a good description of Maycomb? Does it describe American society itself during the 1930s? What about our society today? Why does Scout see everyone as “folks” without divisions?

5. Harper Lee interweaves social commentary about politics, class, and race with a coming-of-age story and a portrait of small town Southern life during the Depression. Is she successful at smoothly integrating all three elements? How do all three strands work together to create a story that is sweet, tragic, funny, and deeply serious?

6. What assumptions does Miss Caroline make about the students in her class and vice versa?

7. Why does Scout beat up Walter? Why does Calpurnia scold Scout? What does it reveal about Calpurnia’s role in the Finch household? What do Atticus’s comments about the Ewell family and the law suggest about his view of justice?

1. How do Scout and Jem change over the course of the novel? Are these changes inevitable, or are they shaped by the people around them and the events they are both witness to and participants in?

2. How do Scout and Jem learn about the Tom Robinson case? Why does Atticus defend Tom? What does Scout understand about race when we first meet her and what does she learn as the story unfolds? What about Jem?

3. Would children be allowed to witness such a trial today? What do the children discover about their town, their father, and themselves by attending the trial? How does the trial and its aftermath affect Jem and Scout? Today, high-profile trials can often be viewed on TV or online —what impact does this have on children and our society?

4. What role does the setting play in the story? What would have been different had the story taken place outside of a small Southern town? Racial issues still occur in our society today—what impact does location/setting play in relation to these issues?

5. Why did Boo Radley and the Radley’s house fascinate Scout, Jem, and Dill? How do the adults behave toward the Radley’s? Why did Boo watch over Jem and Scout? In saving the children from their attacker, did Boo do a bad thing? When she meets him for the first time, why does Scout address him as Mr. Arthur instead of Boo? Why do you think the children never saw him again after that night? Do you think he continued to watch over them?

6. What did Atticus ask about during his cross-examination? Why do you think he asked these questions? Explain why Tom’s testimony makes Scout feel sympathetic towards both Tom and Mayella. What does Tom say that outrages the white people in attendance? Why is this so offensive to them? Why does Tom say he ran from authorities in spite of his innocence?

7. Can a film ever capture the depth of a book? What does the film version offer audiences beyond the book?

8. Librarians across America voted To Kill a Mockingbird the best novel of the twentieth century, yet the book is continuously challenged and often banned by schools and communities. What makes the novel so important and so divisive? What does the novel say about America in the recent past? What insights and lessons does it hold for us today?

Atticus – Father to Jem and Scout

Calpurnia – Maid to the Finches

Dill - friend to Jem and Scout

Harper Lee was born in 1926 in Monroeville, Alabama. She attended Huntingdon College and studied law at the University of Alabama. She is the author of two novels, To Kill a Mockingbird and Go Set a Watchman. Harper Lee has been awarded numerous literary awards, including the Pulitzer Prize and the Presidential Medal of Freedom.

This Harper Lee interview by Roy Newquist originally appeared in his book of interviews, Counterpoint, published in 1964 by Rand McNally.

The Harper Lee ‘Go Set a Watchman’ Fraud by Joe Nocera in the New York Times.

Although racism and the Great Depression are major themes in To Kill a Mockingbird, Harper Lee does not ignore two other themes: gender roles and classism found in the South before the Civil Rights Era. As Jem and Scout discussed toward the end of the book, four classes of people made up society in Maycomb, Alabama. Ordinary folk like the Finches, poorer rural whites like the Walter Cunningham family make up the next. In one of the opening scenes of the book Walter Cunningham is paying off a debt to Atticus by supplying the family with firewood and food. The lowest class of white people would be the Ewells, which the author goes to great lengths to describe. Jem and Scout put all Negroes into the fourth class. Scout is constantly reminded by her Aunt Alexandra and to a lesser extent, Calpurnia, to be mindful of her place in society, both as a girl (soon to be a woman) and as a member of an upper class family.

Harper Lee takes great pleasure at poking fun at gender roles found in Maycomb as depicted in To Kill a Mockingbird, especially through the musings of Scout. The clothing Scout chose to wear is the most obvious example of her feeling of the gender roles in place in Alabama at the time of the novel.

During the time period of To Kill a Mockingbird, Alabama, like other states of the Old Confederacy practiced a rigid form of racial segregation enforced by state and local laws commonly known as “Jim Crow Laws.”  Jim Crow Laws mandated the segregation of public schools, public places, and public transportation, and the segregation of restrooms, restaurants, and drinking fountains for whites and blacks. Jim Crow Laws began in 1877 with the end of Reconstruction and did not end until the passage of the Civil Rights Act of 1964 and the Voting Rights Act of 1965.

The strict enforcement of Jim Crow Laws and a heritage of slavery, barely a generation past, set the backdrop and help explain the actions of the African-Americans in the book. The Jim Crow Laws institutionalized a form of quasi-slavery, which kept the former slaves in the bottom rung of Southern society. As the trial of Tom Robinson vividly points out the penalties for breaking (or even being accused of breaking) one of the Jim Crow Laws carried with it very serious consequences for the accused in the 1930s south.

What films were showing at the Picture Show?